Mrs. Adrian became a widow at 34. At that time, I thought she was ancient. She was all of more than 3 times my age, she seemed like a relic to me. I now realize how young she was, to have become a widow at 34 with 3 children  – 10, 8 and 3 – and that she had the foresight to get her own bag to avoid disgusting in-laws grabbing everything/anything they wanted.

When we were younger, the word “widow” brought smiles to our faces! Hahaha, seriously. For Hipilicious, Skinny and I, our monthly highlight was the Christian Widows Fellowship which we attended with Mrs. Adrian. This meant going to visit other widows and hanging out with their kids – these visits were so much fun! On Sunday after church, we’d go to a random widow’s house, have lunch (usually chapo and pilau) then play till evening. When we became teenagers, we didn’t really find these meetings fun and Skinny became our official representative at these gatherings. I think this was where I lost out on having everyone referring to Mrs. Adrian as “Mama Njenva” and it morphed to “Mama Skinny”. I was so shocked the first time I heard someone say “Mama Skinny”, like don’t they know I exist. This fellowship was such an amazing support group for the women and their kids. I remember some kids saying that they felt understood by others who also didn’t have fathers. I also remember how these women were so happy for one of their own, Mrs. Tailor, who found love again with an older gentleman – they helped her plan her wedding and were so supportive of her decision.

Anyhow, It’s been a couple of decades since Mrs. Adrian became a widow and WOW. I don’t think anyone could have ever predicted her success in raising her kids, making ends meet and getting the best she could for her children. There were tough times, I won’t lie. Days when we’d have sima and kiluma for dinner Kiluma is just plain water with salt and lemon juice. One of Mrs. Adrian’s friends came to visit us on New Years, I think maybe a year or two after Mrs. Adrian became a widow, and she was shocked that our New Year’s meal was sima, kiluma and tomato sauce. You would have never known that things were hard, nope. She has always encouraged others and been the intercessor for others who had no idea that she had it rough. As kids, it was tougher to understand why we couldn’t go on school trips, why at some point I wore slippers to school and to church since she couldn’t afford to buy me shoes and why we didn’t have luxuries that other people took for granted. With time, I am amazed at how much she was able to do with the little she had. Educating multiple relatives at the same time, housing at least 3 or 4 people at any given time (there’s a time I had to sleep in the bathtub lined with clothes – the house was full of people and there was no more sleeping space for me!) and feeding her household and the people in Dzariguta land.

I think being a widow made Mrs. Adrian more prayerful. We started having family prayers soon after Mrs. Adrian became a widow and this has been standard – one day a month, we open our prayer book, write down the things we are grateful for, give thanks for answered prayers and then write out new prayers. We keep laughing because one of the first things we prayed for was a wall clock. A wall clock. And it took over 2 years for Mrs. Adrian to save enough to afford a wall clock. Our prayers are bolder now, we have big hairy audacious requests! We’ve seen what God can do for His widow and we trust Him to continue hearing our prayers.

My prayer today is for God to heal Mrs. Adrian and give her joy, strength and peace that will allow her to enjoy herself to the glory of God! 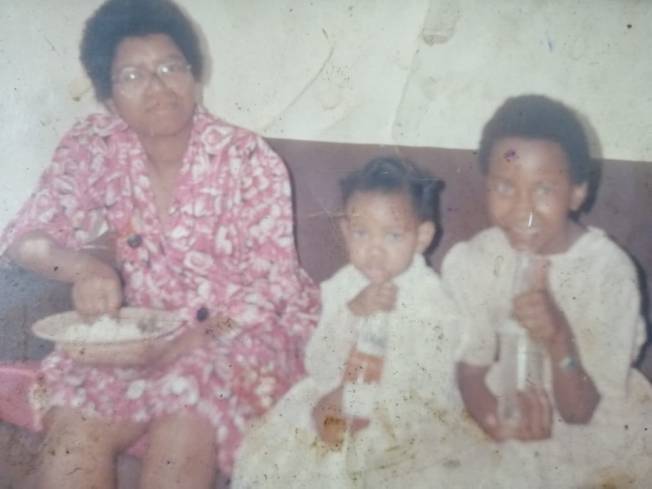 Mrs. Adrian, Skinny and Hipilicious in the 90s